Australia’s first ‘smart playground’, Kinkuna Park in Eglington, Perth is being recognised for its game-changing innovation.

“The trial has been deemed an outstanding success not only locally but with it also being nominated for the 2019 Smart Cities Awards and recognised as a finalist in the Parks & Leisure Australia (PLA) 2019 Awards,” Simon said.

“Augmented reality ‘markers’ fitted to play equipment in Kinkuna Park link to a free smart phone app which gives parent access to games they can use to engage children of all ages and abilities in energetic, imaginative play.

“Kids might be spotting magical butterflies near the swings or climbing ladders in search of runaway robots. It’s safe, supervised fun that allows kids to derive all of the physical, mental and developmental benefits of play.”

Simon said in addition to encouraging active, outdoor play, the technology collects usage data that helps Councils better understand how, when and why their community is using their local playground.

“The City of Wanneroo can now use this data, which is anonymised and encrypted to protect residents’ privacy, to inform decisions about the placement and design of new playgrounds and upgrades to existing playgrounds.”

Simon said Councils like the City of Wanneroo are committed to building healthy, safe, vibrant and connected communities.

“Technology is frequently pinpointed as a barrier to achieving these goals, blamed for kids’ inactive lifestyles and associated health issues such as childhood obesity,” he said.

“However, the integration of technology into play spaces overseas and now here, through the Kinkuna Park trial, shows the opposite can be true.”

Playground Centre’s Smart Playgrounds use technology created by Canadian company, Biba. Biba is recognised by the World Health Organisation (WHO) and is highly regarded by the Journal of Child Health Care with their study of children’s physical activity levels during imagination-based mobile games. Biba Apps have been developed in accordance with Children’s Online Privacy Protection Act (COPPA) and are certified by kidSAFE.

“The games available on the Biba Playground Games app are based on years of motivational design and psychology research,” Simon said.

“They are specifically designed to get children active and playing for longer, while also increasing engagement between children and their families.

“What makes it better still is that the app remembers what activities children did previously, so new challenges are issued each time they visit, effectively reinventing the park.” 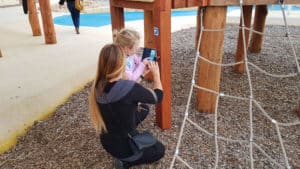 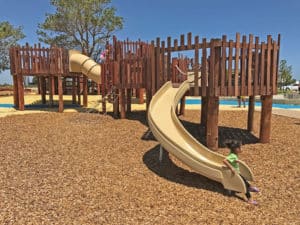