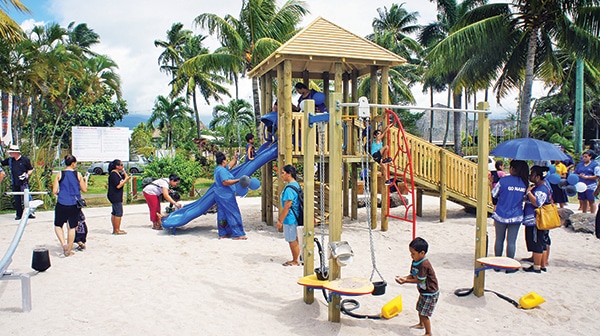 Parks and playgrounds are absolutely essential to public health.

As we celebrate World Health Day on 7 April, a quick glance at obesity statistics paints a worrying picture across Australia and New Zealand. The good news is that developers, councils and landscape architects are heeding the call, taking play spaces to a new level.

Food choices, lack of physical activity, sedentary pursuits, genetics and parental risk aversion are just some of the reasons that childhood obesity in particular is such a sweeping and accelerating issue.

According to parents, the majority of Australian children are spending at least three hours using screen-based devices at home on a typical day, with an average of 4.6 hours on a weekday and 4.5 hours on a weekend day. Almost all (94%) Australian teenagers and two-thirds (67%) of primary school-aged children and over a third (36%) of preschoolers have their own mobile screen-based device.

Studies show a positive association between access to parks and physical activity levels.

Allowing children to play freely in the outdoors, specifically at playgrounds, encourages movement. Any game played in the outdoors will promote an active lifestyle and test physical limits.

Exercise can often be considered a chore, so it’s important to ensure that fitness is fun. This will encourage the development of healthy habits, and children will be more inclined to partake in voluntary physical exercise as they grow older. Regular exercise benefits children by building strong muscles and bones, assisting with weight control, decreasing the risk of developing type 2 diabetes and releases endorphins for a healthy mindset. Outdoor play and exercise go hand-in-hand - resulting in health for all. #HealthForAll #WorldHealthDay